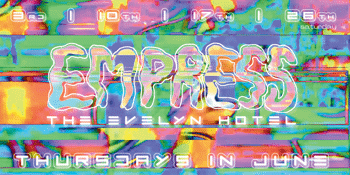 Special Guests
The Evelyn Hotel (Fitzroy, VIC)
Saturday, 26 June 2021 7:00 pm
2 days away
18 Plus
Indie
Dance
Send this event to
After launching themselves into the scene with two sold out shows at Colour Club in February, and then packing out The Toff In Town last week, EMPRESS is now leaping into bigger and better triumphs, staging an epic TAKEOVER of the newly renovated Evelyn Hotel Bandroom next month. The six-piece electro-soul collective will be igniting the stage every Thursday night in June, curating a killer lineup of Melbourne musicians, with each show featuring different stage designs from Naarm-based artists. The residency will be completed by an epic Saturday Night FINALE on the 26th of June alongside Emma Volard and Skinny Wizard, launching their live music video into the world.

Come down to the Ev hotel in June and catch a glimpse (or even a GLARE) of EMPRESS doing their thang alongside their friends and extended family. This exciting new collective is on the rise, and we recommend you catch them before they explode.