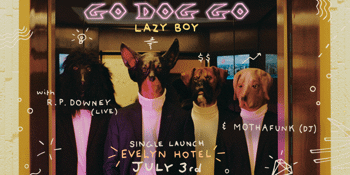 Rolling off the back of a sold out show launching their March release ‘The Movie’, Go Dog Go are headed to Naarm/Melbourne’s beloved and revamped Evelyn Hotel to celebrate the release of their second single, ‘Lazy Boy’.

‘Lazy Boy’ will be released on the 22nd of June, and comes as the next taste of the band’s debut EP expected later in the year. With this release, they will also be offering their first venture into the music video world, with a thrilling clip directed and shot by filmographer Michael Ridley (Violent Soho, Rolling Blackouts Coastal Fever) and co-directed by photographer Izzie Austin (Surprise Chef, GL).

For those who can recall the 'before times', Go Dog Go played a mammoth residency at the Ev’ in May 2019, and have been itching to get back and play at the newly renovated bandroom. The band will be joined by Naarm-via-Chicago based DJ Mothafunk, and electronic extraordinaire R. P. Downie (Polito, Hemm).