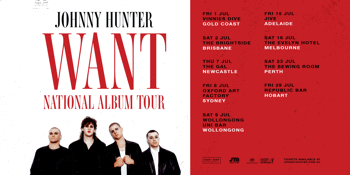 Special Guests
The Evelyn Hotel (Fitzroy, VIC)
Saturday, 16 July 2022 8:00 PM
13 days away
18 Plus
Indie
Send this event to
Since emerging from the shadows of Sydney’s grim nightlife in 2019, Johnny Hunter have quickly risen to underground cult favourites, selling out rooms across Australia’s East Coast and winning audiences over supporting the likes of Jack White and The Saboteurs, City Calm Down and Polish Club to name a few. Though their sound is rooted in nostalgia, their furiously honest song writing and explosive performance style is undeniably made for now.

To celebrate the release of their debut album ‘Want’, Sydney cult heroes Johnny Hunter announce their first headline national tour. Their raucous Cabaret will visit the far corner of Perth, the tropics of Queensland, NSW, Melbourne and for the first time Adelaide and Hobart. Coming straight off their double residency tour which saw the post punk outfit fill rooms in Sydney and Melbourne twice a week for a month, Johnny Hunter is ready to be all that you WANT.

“One of the country's most promising bands” - The Music.